Have We Forgotten About Khris Middleton?

Khris Middleton has been humming along with similar numbers to past seasons. Left off the all-star team, it appears many have all but forgotten about Khris. 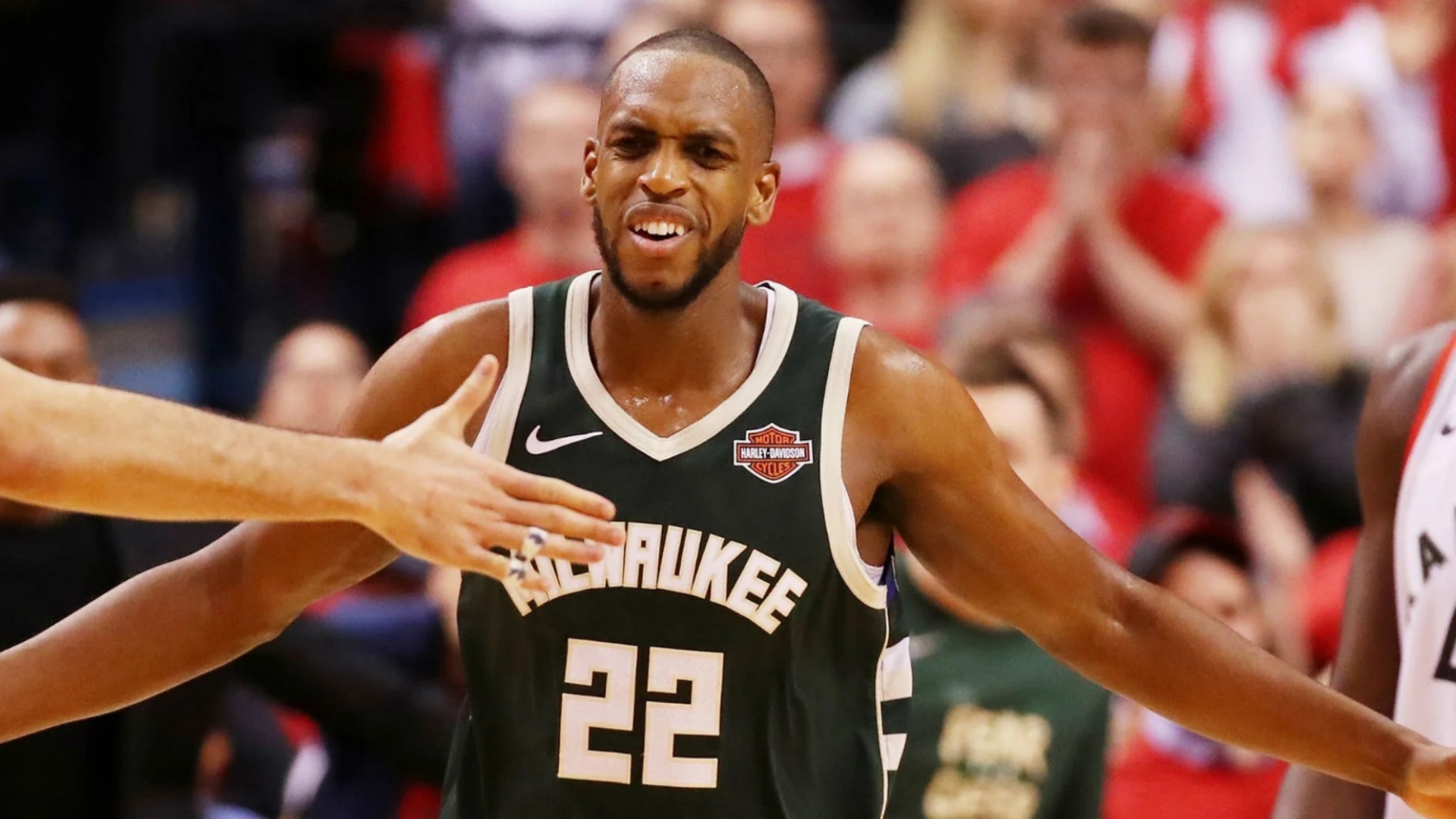 It has been several weeks now since the All-Star teams were announced. And there was plenty of heated debate about who got snubbed from each conference. Several injury replacements gave Adam Silver a chance to right some wrongs. He even awarded Mike Conley Jr. an All-Star debut in his fourteenth season in the league.

But of course, no selection was going to make everyone happy. Before getting selected as an alternate, Devin Booker’s camp (which included Lebron) claimed he was the “most disrespected player in the league.” Usually, on the quiet side, Demar Derozan even got salty on Twitter after losing out on a selection.

We’re not sure about Bucks fans, but we were wondering what happened to Khris Middleton? The dude is averaging 20 points per game on high efficiency. And we all saw what he can do without Giannis when he heroically staved off elimination in Game 4 against the Miami Heat last playoffs.

Khris has shown season after season that he just gets buckets. But so far in this shortened season, bucket-getters seem to be falling from the sky! Currently, forty players are averaging over 20 points per game! This is huge even when compared to the 27 and 29 players doing the same in the past two seasons respectively.

But to get some real perspective, we can look at the year Kevin Durant won his second scoring title. He led the league in scoring averaging 28 points per game. But even more shocking, only eleven other players were averaging over 20 points per game in the 2011-2012 season!

Khris may be one of forty this season, but from a quick glance, his numbers look almost identical to previous years. Seasons in which he was selected to the East team. So what gives?

It’s not all about scoring...Right guys?

Focusing on scoring to indicate a player’s value is a fallacy for many reasons. There are ten players on the floor and a lot of things happen besides scoring. However, it can sometimes be difficult to quantify the impact of rim protectors like Rudy Gobert and Clint Capela. Or pass-first playmakers like Chris Paul or perimeter defenders like Ben Simmons.

But even when it comes to scoring, some players produce at an elite shooting clip. And when it comes to shooting, Khris Middleton is one of the best! But despite having similar numbers to his past all-star seasons, the narrative on Khris is that he is having a “down” year. Perhaps even more telling was the lack of any media takes claiming that Khris was robbed from an all-star selection.

And it’s not like Khris is playing on a bad team. After consecutive playoff flops, NBA fans aren’t taking the Bucks as seriously as before. It would appear that everyone has all but forgotten about the silky smooth forward and maybe even the team he plays on.

Most NBA fans and hot-take merchants of the sports world won’t look at the game much beyond the basic box score e.g. scoring, rebounds, etc. So let’s take a look at Khris’s numbers and see what we can find out. Right now he is sitting at about 20 points, 6 rebounds, and 6 assists per game. Not too shabby but nothing that just leaps off the page and screams superstar!

What about his shooting splits? Khris is 49.8 percent from the field, 42.8 percent on 5.2 three-point attempts per game, and 88.5 percent from the foul line. He is on pace to have another 50-40-90 season. His true shooting percentage (TS) is currently 61.3 percent which is the second-best shooting season of his career.

Kris is having his best season as a playmaker with 5.6 APG and an assist percentage of 24.3 percent. His Box Plus-Minus (BPM) is 2.6 which places him just outside of the top 40 in the league. He ranks in the low to mid-thirties in the league for stats like VORP (33rd) OBPM (31st) and WS/48 (36th) in the league. And Middleton is 18th in the league in total WS with 4.2

Khris’s traditional numbers are eerily similar to last season. His offensive stats are identical besides the jump in assists per game. However, when we look at advanced stats from Basketball-Reference”, the past two seasons we can see some glaring differences.

So far in this season, Khris is a negative in Defensive Box Plus-Minus, a stat in which he had a positive impact for the past two seasons. And if we look at Regularized Adjusted Plus-Minus RAPM, Khris was top 20 in the league the past two years. But right now, he currently ranked all the way down at 146th in the NBA! Why the drop? Again his Defensive RAPM is negative per 100 possessions contrasting to his positive impact in the two years prior.

And if we look to FiveThirtyEight's RAPTOR rankings, we see the same story. Khris' Box, On/Off and Overall RAPTOR ratings have all become negative on the defensive side of the ball. And last season while maintaining a plus 1.2 Defensive RAPTOR rating, Khris finished 16th in the league in RAPTOR Wins Above Replacement at 8.4 This season, he currently sitting at a RAPTOR WAR of 3.4.

The Bucks defense aims to stop opponents from scoring at the rim, and they are normally happy to give up the three. Their opponent’s three-point attempts and percentages are not much different from the past seasons. In fact, they have reduced the number of corner threes they give up by about ten percent. The main difference for the Bucks seems to be when their opponents can slow play down. They are currently 24th in the league when it comes to defending sets in the halfcourt.

Last season, Khris was part of the best 5-man defensive lineup in the league holding opponents to an other-worldly 93.1 points per 100 possessions. This year it’s a different story. Eric Bledsoe and Wesley Mathews are long gone. But Jrue Holiday is no defensive slouch.

When we look at Milwaukee’s lineups we see that Khris is featured in the four most used 5-man lineups in this season and last. Defensively, these lineups are very solid. Except for when Bryn Forbes is in at PG this year or last season where Ersan Ilyasova was in for Giannis. Both of those lineups have a defensive rating of 120!

What seems to be different this year is that Khris has been getting more runs with a second unit consisting of Augustine, Connaughton, Craig, and Portis. This lineup in 82 possessions so far, has a defensive rating of 137! For whatever reason that lineup has been getting run out, we sure hope Bud has enough of it!

According to Cleaning the Glass, opponents shoot better from distance and score +2.7 points per 100 possessions when Middleton is on the floor. But what’s really interesting is that opponents shoot about 1 percent more corner 3s, but make 19 percent more of them! This stat is most likely misleading due to small sample sizes and should regress towards the mean as the season carries on.

Well, unless Khris is just leaving his man open in the corner? He wouldn’t do that right?

What does it all mean?

If Khris manages to stay away from that awful second unit and watches for the opponent corner three, he should end up closer to a net-zero defensive impact. Hell, maybe he will even end up with a positive impact. He has shown his ability to be a plus defender on the best in the league for the past two seasons.

But it isn’t solely up to him. Khris’ success on the defensive end will depend on the Buck’s figuring out their woes in the half-court. Coach Bud needs to hone in on his best lineups and of course, they need a healthy Jrue Holiday.

This slippage in defense really brings down Middleton from a top 20 to a top 40 player in the league. And hence his absence from the all-star team. But we aren’t playing for All-Star selections anyway (Penny Hardaway anyone?). It’s rings or bust in the NBA.

If the numbers tell us anything, it’s that Khris and the Bucks still have time to right the course and compete for the ‘chip come this May.