Sweet 16 Betting Predictions and Analyses, Games to Watch This Weekend

We're heading into the Sweet 16 of the 2021 March Madness, and the upcoming weekend will be full of exciting matchups. All eight games will be played in Indianapolis, at Hinkle Fieldhouse and Bankers Life Fieldhouse. 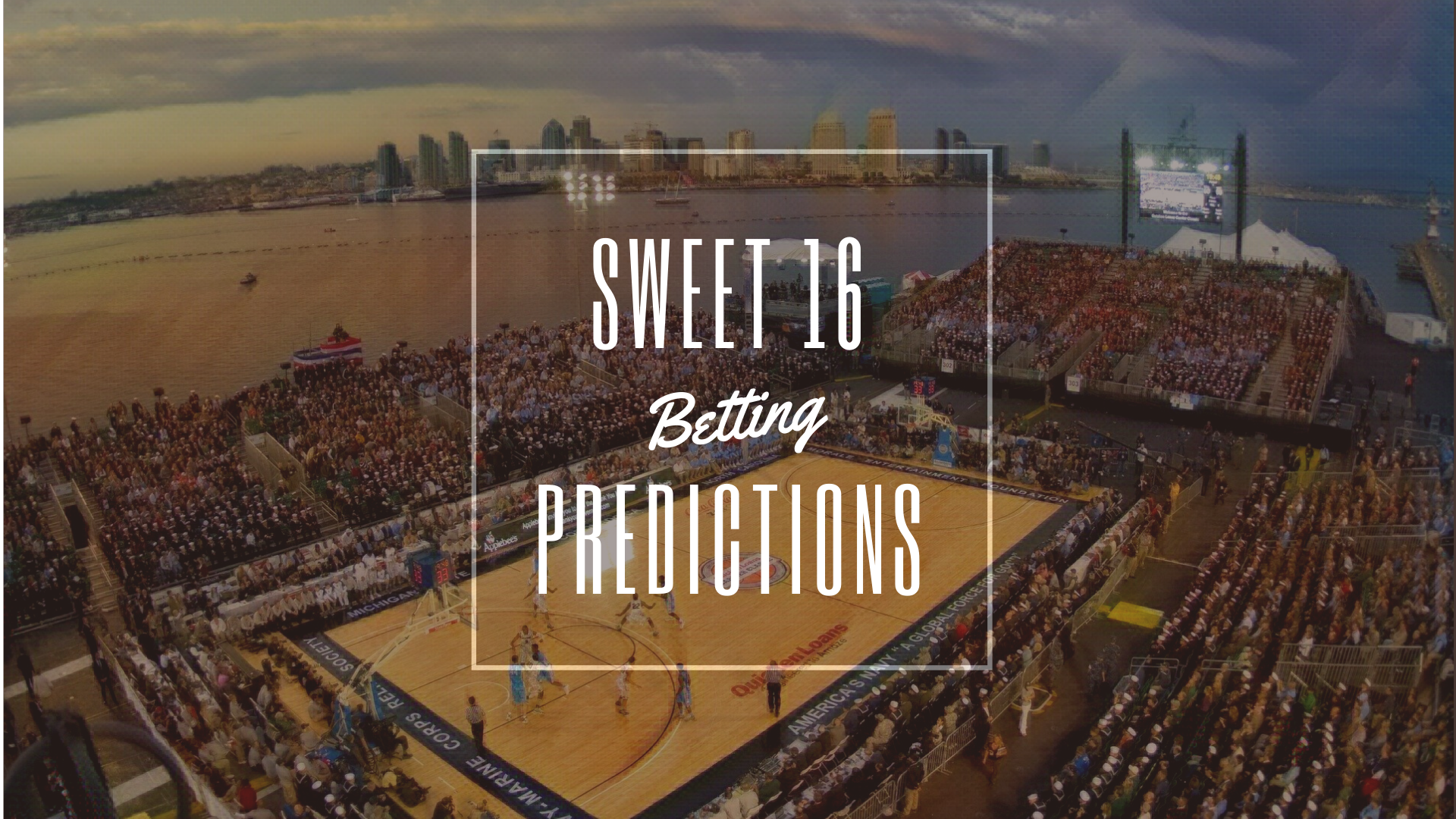 You don't want to miss any of this season's Sweet 16 action, as the Big Dance has been full of thrilling games thus far. Therefore, I've prepared all the key tips and trends along with my best college basketball betting picks for four tilts you just have to see this weekend.

Both Oregon State and Loyola Chicago pulled off huge upsets in the previous round and look determined to stay on the winning path. The Beavers have won five straight games as underdogs and are 12-1 ATS in their last 13 outings at any location. On the other side, the Ramblers are undefeated in eight straight outings and are 5-0 ATS over their previous five games.

Oregon State beat the No. 4 Oklahoma State 80-70 in the second round, holding the Cowboys to 27.7% shooting from the field. Now, the Cowboys are taking on one of the best defensive teams in the country, and the Ramblers have just stunned the No. 1 Illinois as 7-point underdogs, 71-58.

In each of their last five outings, the Ramblers haven't allowed more than 65 points while limiting their opponents below a 60-point mark three times in the process. They surrender only 55.8 points per game (1st in the country), and the Ramblers also make 50.4% of their field goals (5th) and 37.0% of their 3-pointers (46th).

Led by senior center Cameron Krutwig (15.0 PPG, 6.9 RPG), Loyola Chicago is arguably a better team in this matchup, but wagering on the under on the totals is another tempting option. The Ramblers take their time and average only 63.9 possessions per 40 minutes (342nd), while the Beavers record 65.7 (303rd), so we should be expecting some slow-paced basketball.

Cameron Krutwig was a freshman starter on the Loyola Chicago @FinalFour team in 2018.

The under is 14-6 in Loyola's last 20 outings, but the over has hit in seven of the Beavers' previous eight. On paper, Oregon State is not an elite defensive team and yields 96.2 points per 100 possessions (69th) on 42.9% shooting from the field (156th). Still, the Beavers have improved a lot over the last few weeks, and they defend the 3-point line well, ranking 25th in the country in opponent 3P% (30.1).

Bottom line, you can't feel comfortable either with a 6.5-point spread or a 125.5-point line on the totals, so I suggest you buy a few points whatever you take in the end. The Beavers have been ridiculous against the spread lately, covering in 11 of their last 12 showings as underdogs. Also, they are 9-2 ATS in their previous 11 outings as dogs of 6.5 or more points.

Villanova lost its star senior guard Collin Gillespie (14.0 PPG, 4.6 APG) due to a knee injury in the final week of the regular season and suffered a heartbreaking 72-71 loss to Georgetown in the Big East Tournament quarterfinal. Still, you cannot underestimate the Wildcats even though they faced a couple of mediocre teams in the first two rounds of the NCAA Championship.

After a 73-63 victory over the No. 12 Winthrop, the Wildcats thrashed off the No. 13 North Texas as 6-point favorites, 84-61. However, Villanova is only 3-3 straight up and ATS in its last six outings and 7-5 SU and 6-6 ATS over its previous 12 games overall. The Wildcats could easily struggle against the Bears who have been one of the most dominant teams in basketball for most of the season.

Baylor had a three-week break in February caused by the COVID-19, and the Bears have had some problems with consistency since then. They suffered an 83-74 defeat to Oklahoma State in the Big 12 Tournament semifinal, but the Bears easily outlasted the No. 16 Hartford 79-55 and the No. 9 Wisconsin 76-63 in the previous two rounds of March Madness.

Considering their depth, the Bears shouldn't have too many problems reaching the next round, though covering a 7.5-spread might be a tall task. Baylor is just 3-6 ATS in its last nine games and 1-6 ATS in its previous seven outings as a fave of 7.5 or more points.

The Wildcats will try their best to slow down things and make some stops, as the Bears rank 16th in field goal percentage (48.8%) and first in 3-point percentage (41.5%). That's some serious numbers for the Big 12 school, so I'm backing Baylor to win by four or more points.

Although they lost senior forward Isaiah Livers (13.1 PPG, 6.0 RPG) for the season, the Wolverines are still the third-strongest fave to win the national championship with their odds at +700. On the other side, the Seminoles are listed at +2000 to go all the way, but they are just a 2.5-point dog in Sunday's Sweet 16 clash at Bankers Life Fieldhouse.

Everyone's expecting a hard-fought battle between a couple of super talented teams. Freshman center Hunter Dickinson (14.2 PPG, 7.5 RPG) will be a focal point of Michigan's offense, but the Seminoles are a physically tough team and can switch almost everything on the defensive end.

Through their first two outings in the 2021 NCAA Tournament, the Seminoles have surrendered 53.5 points per game on 33.6% shooting from the field and 25.0% from beyond the 3-point line. After a 64-54 first-round win over the No. 13 UNC Greensboro, Florida State dismantled the No. 5 Colorado in the second round, 71-53.

This is a must-watch occasion, and I would be upset if the Seminoles and Wolverines fail to meet the expectations. Therefore, I'll take the risk and bet on any team to win by five or fewer points. Florida State is 12-6 ATS in its last 18 games as an underdog, while Michigan is 13-6 ATS in its last 19 contests as a favorite. The Wolverines have won two of their last three encounters with the Seminoles who have covered the spread on all three occasions.

There's nothing more exciting than the conference showdown in the NCAA Tournament. The Pac-12 has dominated the tourney thus far, and the Ducks and Trojans will lock horns Sunday night to wrap up Sweet 16. I suggest you forget about that 1.5-point spread and take the moneyline odds. USC is a -130 fave to win straight up, while Oregon sits at +110.

These two foes already met in February, and the Trojans hammered the Ducks as 3.5-point home favorites, 72-58. USC had a 21-point lead at halftime and never looked back, dominating Oregon in the paint with 15 offensive rebounds.

The Ducks lack height and will struggle to cope with freshman forward Evan Mobley (16.5 PPG, 8.8 RPG). They routed the No. 2 Iowa as 5-point dogs in the previous round, 95-80, but the Hawkeyes are arguably a mediocre defensive team, while the Trojans rank fifth in the nation in points allowed per 100 possessions (88.0) and fourth in opponent field goal percentage (38.7%).

USC is 5-2 SU and ATS in its last five meetings with Oregon. This is another matchup where you can opt with any team to win by five or fewer points at +170 odds, as both teams will give everything they have to beat their conference foe.