New York Knicks are not getting enough credit for their improvement 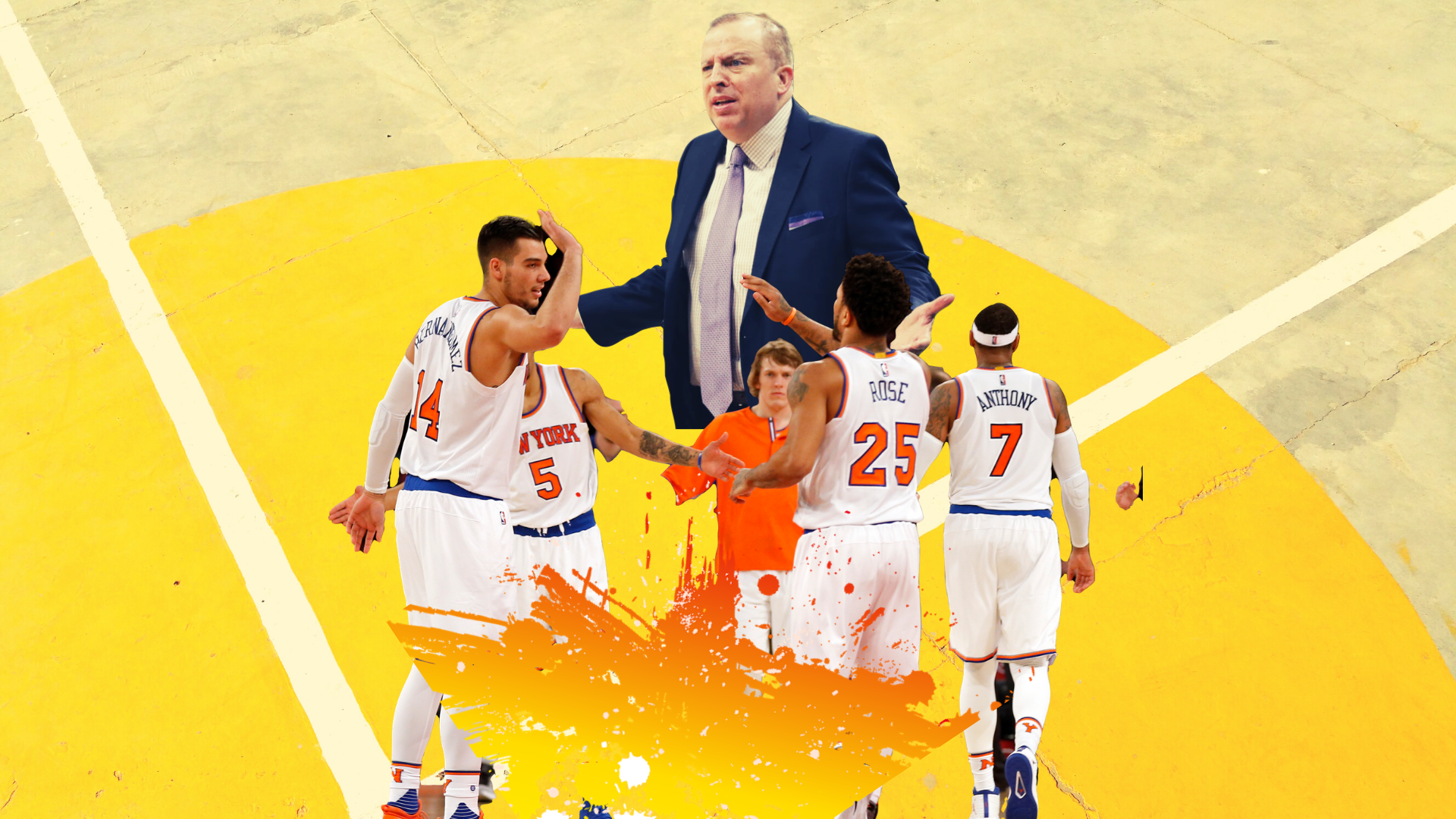 While everybody is talking about the Nets and their superstars, the most pleasant surprise of the season are the Knicks. The New York Knicks seem to have left behind the ghosts that have haunted them for the past decade. No one would have imagined that having reached the halfway point of the Regular Season, the New York franchise would register a solid balance (25-25), giving the feeling that its performance can be maintained over time and even improve. Even less was predicted that they would only be, at this point, in play in a spot with real hopes to reach the playoffs.

And this is the third time in twenty years that they are at 50% in games won, having played 50 games. Since the 2012/13 season, the Knicks did not enter March with a positive balance. Until now.

In New York, there are, for the first time in a long time, the foundations that any team needs to build an identity, a serious and competitive project: defined roles of its players, regularity, defensive solidity, a young block, a leader, and, above all, everything, a coach who makes all this possible.

Generally speaking, team chemistry is dominating the Big Apple. As with all teams, there is always a name that stands out more than the rest, as is the case with Julius Randle, but in this case, the balance and variety of options within the rotation are helping to carry out games that, not long ago, they would have been lost. All this happens to have a good assignment of roles and that they are carried out accordingly.

Randle is the cornerstone on which the team revolves. He has adapted his game to the needs of each game and is the player who has played the most minutes in the league, followed by RJ Barrett, who is seventh on this list. As is normal in Tom Thibodeau, each one must know his role well and, surely, said occupation together with his distribution of minutes will not change during the season, except for unforeseen circumstances. The coach uses a completely fixed starting quintet, but a rotation that is not too short. Excluding Austin Rivers after the arrival of Derrick Rose, as many as thirteen players are averaging more than 12 minutes per game. The second unit, led by Rose himself, rookie Immanuel Quickley and Alec Burks, is giving an interesting scoring depth to the squad.

One of the fundamental premises to demonstrate the seriousness of a project is consistency, overcoming the ups and downs that occur during the season, a situation that occurs more than desired in the NBA, especially in a team that is growing. with the right to make mistakes and learn from them.

The fact is that in New York they are winning while learning. Thibodeau's men indeed linked several defeats in a row in the early stages of the season, but February (9-5) could be a turning point for the fight for positive balance and the Playoffs to be a reality.

There is no dispute that Tom Thibodeau's hand in the Knicks' defensive scheme is more than evident as well as effective. The Knicks are the team that receives the fewest points per game (104) of the entire NBA. The slow tempo proposed by 'Thibs', and the priority of denying easy baskets in the paint is being fundamental in their approach.

Not only do they concede fewer points for being one of the teams that slow down the game the most. His defensive efficiency is elite, ranking second, allowing just 108.1 points per 100 possessions. The Knicks have become a tough team to compete with, one that can score points on the other side of the floor. Of course, securing the boards as much as possible is also essential for Thibodeau, and this is shown by the team's seventh position in rebounds per game (45.7). 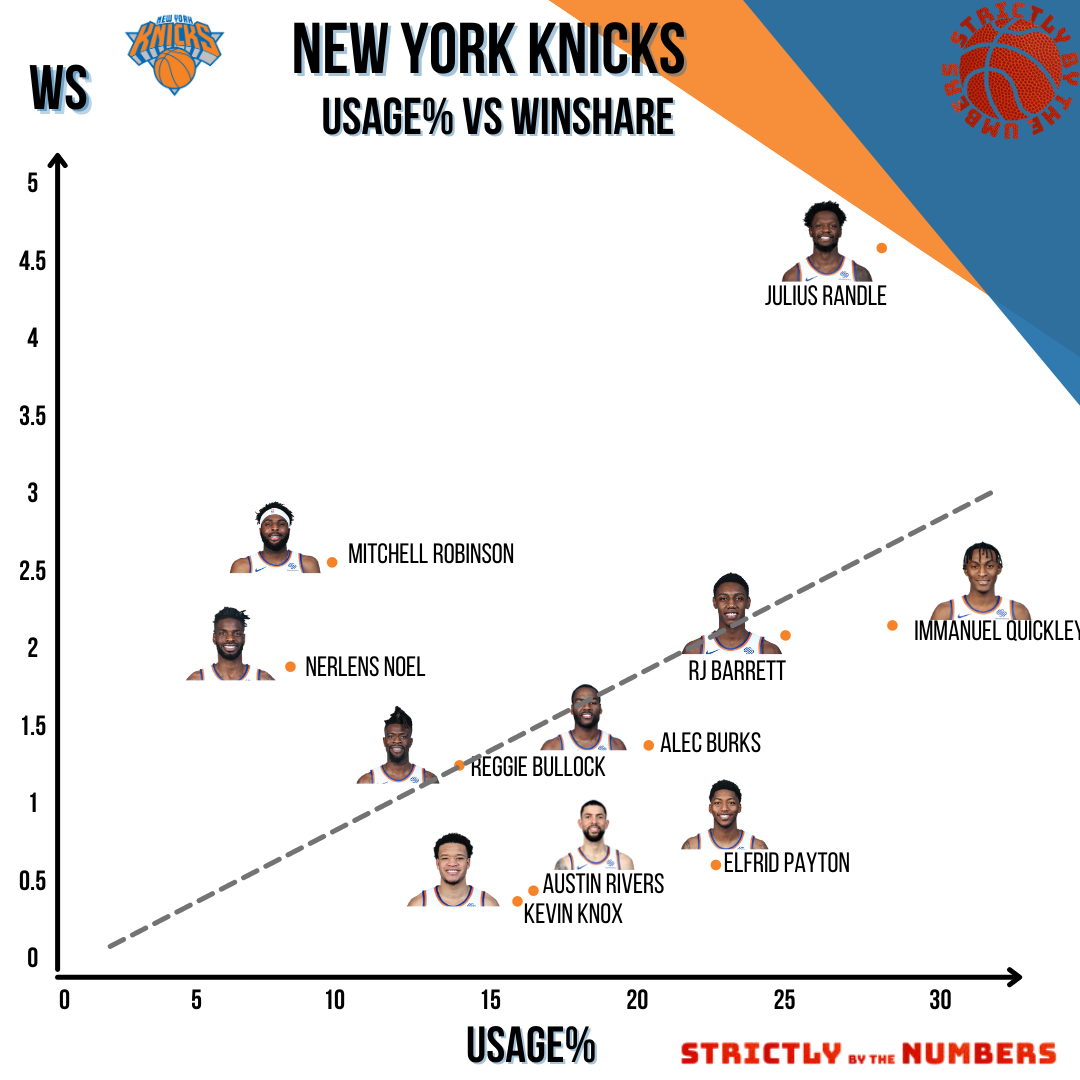 The RJ Barret and Mitchell Robinson projects have been joined by a phenomenon that is gaining the admiration of Knicks fans and a spot in the Rookie of the Year fight: Immanuel Quickley. The 25 pick on the draft is turning out to be a great bet on the part of the New York management. His self-confidence when playing, and his talent are making him gain minutes and be one of the leaders of the second unit. So far this season, he averages 12.4 points, 2.3 assists, and 2.4 rebounds in 18.6 minutes - the timing is important when taking into account these numbers. Also, he is the rookie with the most games scoring more than 25 points, doing it four times. The eighth pick of the draft, Obi Toppin, is not playing too many minutes, in large part due to the explosion of a Randle who is becoming a real star.

AN ALL-STAR IN NEW YORK

The Knicks have a 26-year-old All-Star on their roster. And who knew that it would be Julius Randle in his seventh year as a professional and playing in his third team. His 22.9 points, 10.7 rebounds, and 5.8 assists underscore the great season that the power forward is having. He has 10 games scoring more than 20 points, 10 rebounds, and 5 assists (only Antetokounmpo and Jokic surpass him), a mark that no Knick had reached since David Lee in 09-10

Tibs has a lot of coaching experience and knows perfectly what characterized the franchise at the end of the 90s. The philosophy that he can take back to its maximum expression thanks to his way of understanding basketball: defensive work and control of the game.

I grew up as a Knicks fan, there was no better place to be than at Madison Square Garden. I love the challenges, the city, the stadium, the fans and I'm excited about the team

Thibodeau said of his arrival in New York. Another factor driving this great start is the presence of Mike Woodson on the coaching staff, who trained Carmelo and the company in 2012.

Slow pace, long, organized possessions until you find the best possible option, which is almost always under the rim or in the paint. The Knicks are the team with the fewest triples scored in the league, with just over ten per game, but that does not mean their percentages are bad: Quickley, Randle, Burks, and Reggie Bullock do not fall below 38% from beyond the arc. New York is the slowest-playing team in the entire NBA, with just 96.2 possessions per game. Despite this, we have seen games on spectacular offense, as was the game against the Sacramento Kings earlier in the season: 140 points, a score achieved up to twenty-five times in its history, but the first time it happened with more than 60% and 50% accuracy in field goals and 3-point shots respectively.

The chemistry of the team that has formed is something not seen in the recent history of New York, a franchise that many have avoided in recent years. His relationship with Taj Gibson and Derrick Rose goes beyond the professional and they are two players who have total confidence in him, being under his command in Chicago, Minnesota and now in New York. Gibson is the player who has played the most games for Thibodeau. In the same bag is Rose, his most precious asset during his career on the bench: with him in his squad, Thibodeau records 63% of matches won, while without him, he drops to 46% of victories.

We will see how far these Knicks go, from whom nobody expected anything, with little to lose, but with much to gain and with enormous room for improvement, especially in the long term. After so many years fans in the Big Apple are excited about their team which future finally loos bright