The NBA trade deadline is behind us; we're already in April with around 25 games left to play for each team, so it's the right time to take a closer look at the latest NBA futures update and see who are top favorites to win the 2021 NBA championship. 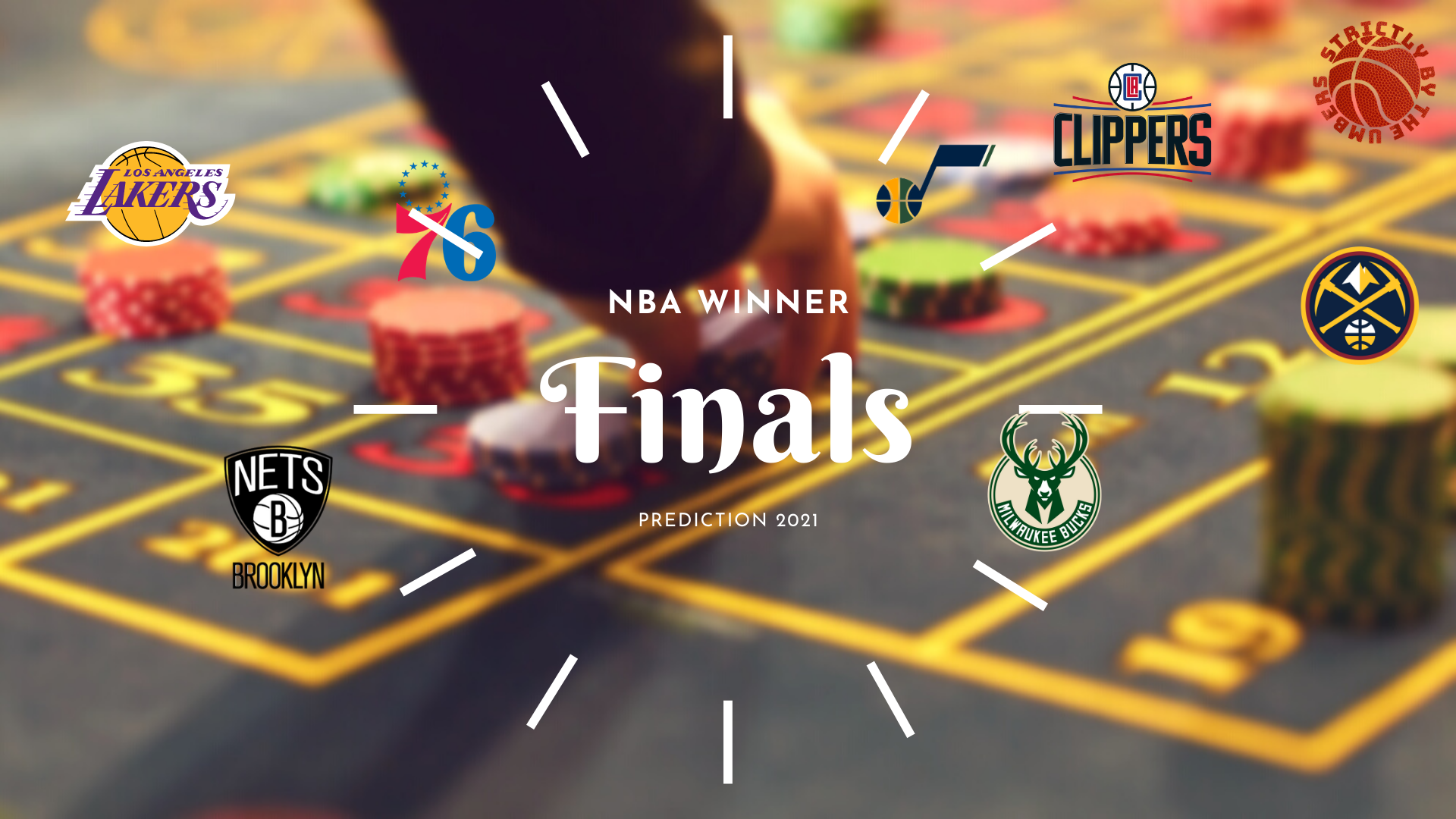 Many say Brooklyn has the best starting lineup in the history of this game, but staying healthy could be a big issue for the Nets. The Lakers added a huge piece to their championship puzzle, while a few more teams that consider themselves as legitimate title contenders tried to get some reinforcements and improve their chances to reach the 2021 NBA Finals.

Since they acquired James Harden in January, the Brooklyn Nets have been considered as runaway favorites to win the Eastern Conference. They are currently sitting at -110 odds to reach the 2021 NBA Finals, and considering their current roster, it would be a huge upset if the Nets fail to win the East.

After Blake Griffin joined the club, the Nets signed LaMarcus Aldridge who just got bought out by the Spurs. Griffin and Aldridge should make the Nets’ frontcourt once they return to full condition, as both these guys have had some serious injury problems over the last two years.

? @aldridge_12 made his presence felt in his Nets debut ? pic.twitter.com/oji5vWFyNQ

Anyway, it seems that Kevin Durant’s health will be a key factor in the Nets’ eventual drive to success. KD is averaging 29.0 points, 7.3 rebounds, and 5.3 assists on the season, but he’s missed 30 games so far due to injuries. James Harden has been terrific in 33 starts with the Nets, racking up 26.1 points and 11.2 assists per game, while Kyrie Irving is adding 27.8 points and 5.9 dimes a night.

the Nets enter the postseason healthy, they will cruise through the Eastern Conference. And from this point of view, it looks like only the healthy Lakers can stop Steve Nash’s team in the NBA Finals. The Nets still have to work on their defense, and neither Griffin nor Aldridge will help a lot on that side of the ball.

The reigning champs have decided to sign Andre Drummond and strengthen their injury-depleted frontcourt. Anthony Davis is still sidelined with a calf injury, and the Lakers will be extremely cautious with their superstar, while Marc Gasol has also struggled with injuries, and he’s not getting any younger.

Drummond should be a great reinforcement for the Lakers. The two-time All-Star played 26 games for the Cavaliers this season, averaging 17.0 points, 13.0 rebounds, and 1.2 blocks per game. The Big Penguin is a four-time NBA rebound champ, and his presence will make the Lakers even more dangerous in the paint.

Of course, LeBron James (25.4 PPG, 7.9 RPG, 7.9 APG) remains the key guy for the reigning champions, and he’s currently on the shelf due to an ankle injury. The Lakers will need all their stars healthy for the playoffs in order to reach the finals for the second straight season, while their defense could be a decisive factor in the eventual matchup with the mighty Nets.

Rajon Rondo won the championship with the Lakers last season before moving his talents to Atlanta in the offseason. However, Rondo returned to Los Angeles last month and will try to get another ring in California, but this time with the LA Clippers.

Rondo will take Lou Williams’ role as a backup point guard, and the Clippers hope his playmaking abilities and defensive IQ will help the team win its first championship. Both Kawhi Leonard (25.9 PPG, 6.4 RPG) and Paul George (22.3 PPG, 5.5 APG) are terrific two-way players, but the Clippers’ depth at center is questionable, especially when Serge Ibaka gets hurt.

LA owns the third-best offensive rating in the league, tallying 117.9 points per 100 possessions, but the Clippers also surrender 111.6 points in a return (12th) and need some improvement on the defensive end. They are listed as the second-strongest fave to win the Western Conference at +225 odds, right behind the Lakers at +180.

Over the last two years, the Bucks have owned the league in the regular season. That hasn’t helped much in the postseason, as Milwaukee couldn’t reach the NBA Finals, so the Bucks took a different approach this term. They are No. 3 seed in the East at the moment and already have 17 losses on the season, but the Bucks remain one of the top favorites to win the championship.

Giannis Antetokounmpo got some help in the paint, as Milwaukee acquired P.J. Tucker from Houston. Although he’s 35, Tucker is still an efficient defensive stopper who can switch everything. Also, P.J. can make open threes, and his style of play will certainly help the Bucks in the next few months.

Milwaukee sits at +325 odds to win the Eastern Conference, right behind the Nets and ahead of Philadelphia at +475 and Miami at +1100. The bookies expect to see the Bucks vs. Nets in the conference finals, and I would love to watch these two foes taking on each other. Milwaukee could have enough defensive weapons to deal with Brooklyn’s ridiculous offense.

Howsoever, the bookies don’t believe in Utah too much. The Jazz are listed at +450 to win the Western Conference and +900 to go all the way. They possess great depth, so don’t sleep on the Jazz who own the second-best offensive rating (118.0) and the fourth-best defensive rating in the NBA (108.6).

Furthermore, Utah makes the most 3-pointers per game (16.9) while shooting 39.6% from beyond the arc (2nd). Donovan Mitchell is a true leader of this team, averaging 25.7 points and 5.5 assists per game; Rudy Gobert racks up 14.7 points, 13.3 boards, and 2.9 blocks a night, while Jordan Clarkson adds 17.4 points off the bench and is a runaway fave to win the NBA Sixth Man of the Year Award.

The lack of experience might be a problem for Quin Snyder’s boys, for sure. After a couple of semifinal losses, the Jazz exited in the first round in each of the previous two postseasons.

If Joel Embiid stays on the floor, the 76ers can beat anybody. At the moment, the four-time All-Star is on the shelf with a knee injury, but the Sixers continue to roll and hold the second seed in the Eastern Conference.

However, Embiid’s eventual absence in the playoffs would hurt the Sixers’ chances a lot. He’s recording 29.9 points and 11.5 rebounds per game which tells you enough about Joel’s influence on Philadelphia’s offense. Embiid is a defensive anchor as well, and the 76ers have the second-best defensive rating in the league, yielding 107.3 points per 100 possessions.

Philadelphia acquired George Hill on the deadline day, and the 35-year-old combo guard could boost the 76ers’ offense. Hill is a 38.4% shooter from deep through his career, and last season, George was making 46.0% of his 3-pointers.

The Denver Nuggets got Aaron Gordon from Orlando and JaVale McGee from Cleveland, but they are still +800 underdogs to win the Western Conference and +1500 dogs to win the championship. The bookies obviously want to see how it all works in Denver, though Gordon and McGee should improve the Nuggets’ defense a lot.

Aaron is a versatile defender who can guard multiple positions. He’s also a solid playmaker, capable of making open shots and attacking the basket. McGee will play limited minutes behind Nikola Jokic (26.5 PPG, 11.0 RPG, 8.4 APG), but his experience as a three-time champ will be a massive boost for this talented Denver team.

The Miami Heat are surprisingly listed at +1100 to win the East and +2500 to win the title. The reigning champs got Victor Oladipo (20.3 PPG, 4.0 APG) just before the trade deadline, so Miami’s backcourt is now fully loaded.

Finally, don’t forget about the Phoenix Suns who sit at the second spot of the Western Conference standings. Even though they didn’t make any moves, the Suns are set at +1800 to win the championship. Phoenix certainly lacks experience, but if Devin Booker (25.6 PPG, 4.5 APG) and Chris Paul (16.0 PPG, 8.7 APG) continue to play at a high level, everything is possible.